I'm moving my blog to Wordpress.  You can now find my posts at my new site: Getting Inky

I'll be updating the Atlas Quest link today as well.

I've loved my time at Blogger but feel that Wordpress has the features I want as I grow as a blogger.  A neat, cleaner look with better control and accessibility on topics/categories/tags/labels.

Please come by and enjoy. Read my first post on my new blog here: It's Official...
Posted by Mainer Chick at 4:36 PM No comments:

Was scanning letterboxing.org & found a letterbox that was listed in the park.  However the clue to the letterbox makes it sound like it's a geocach instead. So which is it?  Good question.  I may just go looking for it to figure it out.

UPDATE:
I went searching for it but couldn't find it. :-(  found the tree but not the X that marks the spot.
Posted by Mainer Chick at 3:36 PM No comments:

MMCBBE12 is coming up in August and the theme for stamps this year is: "Something you don't know about me/us." And we're supposed to decorate our camp site with something related to who we are.

I'm having the HARDEST time with this. There's not much that people don't know about me. Where it’s not just me at the camp site, it could include my Mom & Daughter also.  But what do people not know about us?  I’m racking my brain to think of something.

I’ve been considering changing my blog’s title. I’m not really sure to what but I’m not really fond of the title, never have been.  True my trail/screen name is Infin-T but I’m sure there must be something else to call my blog besides Infin-T’s Letterboxing Adventures.  I mean after all don’t we all have letterboxing adventures?  And I don’t feel it’s only about my boxin’ adventures, but also tips on boxin’ & art around boxin’.

I always have such a hard time coming up with titles for blogs. Well not just blogs, but also screen names for myself.  My first “handle” was given to me by my ex-boyfriend who smushed a Twinkie in my face & called me Twinkie Face from then on… it ended up the CB radio & then on the BBS on line. Twink-E stuck around for a LONG time, about 7 years or so.  I used it spelt as above because of my real name, Tracie Eastman.  (TE) Somewhere in those 7 years I had also used Maggie Mae, Magenta, Mags, & other variations of the sort. Then I was being called The Ultimate Woman… something about me caring my own tools… *shrug* gay men make no sense some times. So how did I get Infin-T?  Well I had an infinity symbol tattooed on my arm that represents my kids. So I tweaked the word to make it more me after all the T is for Tracie. I’m not really married to the name per say so changing it would be ok.  I’m now trying out Mainer Chick.  I kind of like the sound of it. So you can see my situation, of indecisiveness on my names let alone my blog’s name.

I actually had this conversation in a blog somewhere before, but darn if I can find it now.
What is the story behind your names?
Posted by Mainer Chick at 11:16 AM No comments: 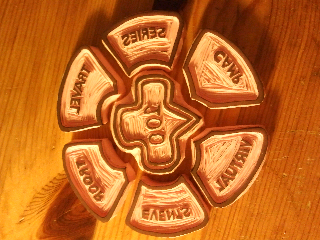 Posted by Mainer Chick at 3:42 PM No comments:

Ok the title of this post is open to several smart remarks... I know.  But this post is about my letterboxing bag/pack.  I've been searching for something to replace what I have, but in reality I already have one of the best bags I think. At this point I may just try to find a way to organize it better.

I've figured out that I should probably add a first aid kit, a small one. I usually have mine in the car anyways, but I'm not always using my car or close to it. There was something else I was thinking I should add but I forgot as I wrote this blog.
I'd be eager to see what you have in YOUR bag. :-)
Posted by Mainer Chick at 10:48 PM 1 comment:

Letterboxing in the news

Recently there's been discussion on the boards regarding an article done by a non-letterboxer about letterboxing.

I've mulled over the story and watched the video and tried to not let other's opinions sway me regarding it.  I think the author had good intent but poor follow through.  The video made me cringe when I watched it.

I love to share my hobby with those interested.   I'm trying to find a good way to open others up to this especially business people who may benefit from some extra visits.  I'm also trying to find a way to ask an artist to help with a series I'd like to make based on their work.

Posted by Mainer Chick at 9:00 PM No comments:

So I have a lot of ideas for new stamps.
For the GS 100th: 100th Anniversary trefoil,  Pathways, membership star, world, new logo, & some cookies.
Portrait: My grandparents,

*more to be added as I think of them.
Posted by Mainer Chick at 8:53 PM No comments:

Unfortunately I'm missing another event I was going to go to.  I just cannot afford to drive down to Saco alone. It totally bums me out.

I think I'm going to take a break from postals for a while just to finish up the rings I'm in and to work on carving and putting together new boxes for the spring.

Maybe I'll add making LTCs to my winter list of things to do.

Although in January I'll be starting a class at CMCC to finish my degree. So I don't know how much time I'll have once that starts.
Posted by Mainer Chick at 10:49 PM No comments: 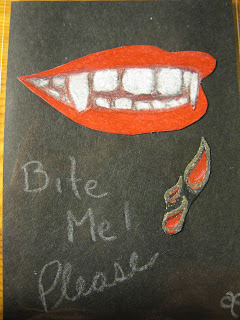 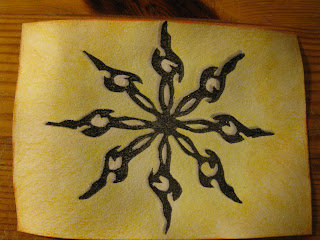 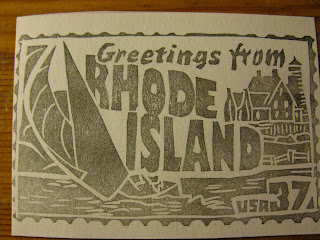 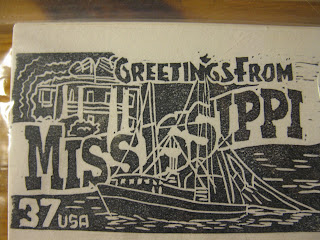 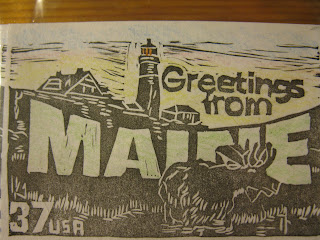